Why You Should Join Your Local Produce CSA...and A Huge Discount on Harvest2U CSA for SoCal'ers! 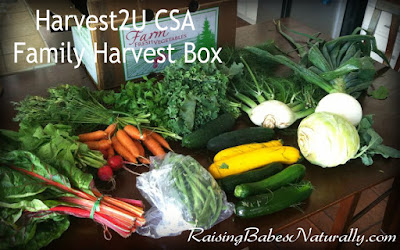 I posted it on my Facebook thread recently...did you see it?


With a produce delivery, I did not have to think anything out, plan a shopping trip, or scour price comparisons...and it even resulted in my children trying 3 new vegetables they'd never had before!

But if I'm being honest, I used to think produce CSA's were kind of a waste of my grocery money, for 3 reasons I've negated here:

Now wait, I know what you're thinking:  "I wouldn't normally buy half that stuff anyway, so it actually increases my grocery bill."

But here's where I spout honest truth, again.


Having more veggies around, especially kinds that you don't normally eat and are forced to figure out a way to work into your meals, actually saves you money!


*  Instead of making a big sandwich with some deli meat and cheese (expensive!) for lunch, my husband grabbed just 2 slices of deli meat, the cucumber dill "tzatziki" I'd made that morning, a handful of crackers, and some carrot and kohlrabi sticks, and went to town!  So he ate less than half the meat he would have put on his sandwich, and added a double dose of veggies (and greek yogurt) he wouldn't have otherwise eaten. (Recipe below)

*  Instead of scrambling 6 eggs for one breakfast for the 4 of us (half a $4.99 organic egg carton in one morning!?!?), I used one, yes one, little egg to mix with my zucchini dill fritters.  So, again, less animal protein being eaten, and waaaaay more veggies. (Recipe below) 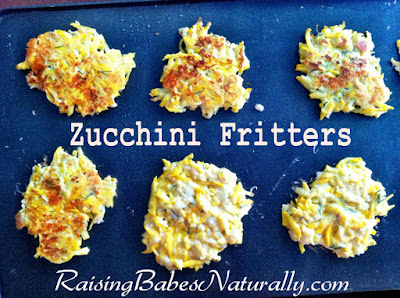 *  Instead of grabbing a quick cheese stick or apple or reaching for carbs in the afternoon, the kids and I have fun throwing that apple in the Vitamix, along with carrots and whatever else they want to try, and make a quick juice that packs infinitely more nutrition than a processed snack.

* Instead of 2 chicken breasts in my chicken and veggie stir-fry, I got away with putting just 1 breast in, and adding a ton more chopped veggies with the hearty fennel, kohlrabi and chard.  I used the other breast for chicken salad, adding kohlrabi, dill and carrots to it, as well.

We absolutely, without a doubt, ate double our normal vegetables, and much less animal protein and carbs.  And we all know how those meats, cheeses and processed snack foods can add up!

Now, I think I know what you're thinking again...and it leads me to #2:  "Who has time to prep all that produce?"

You get it all done in one fell swoop and actually save time throughout your week.  I always plan for the day I'm going to get my box and take an hour to:

* wash it all
* pluck/chop herbs and put in bags
* peel some carrots and chop and put in water in fridge for easy snacking
* throw onion in food processor to have it pre-chopped/sliced for dinners
* chop and bag lettuces for sandwiches/salads
* set aside big bag of some of all for my green juicing
* look up recipes for any produce i'm not familiar with
* plan my week's menu based around the produce, rather than based around an animal protein, and buy the remainder of my groceries as needed. 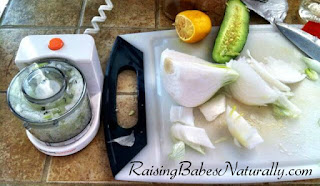 One hour.  Done.  Prepped for a week or more of snacks, lunches and dinners.  Not to mention the kids have fun checking out all the goods and munching as they help! 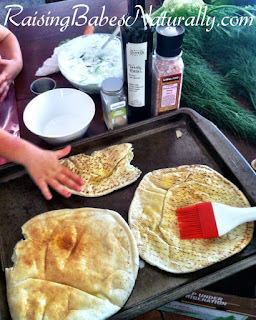 And, since I'm psychic, I know that you're now thinking, "Umm, my kids might munch on the blueberries and carrots, but not much else."  Which, leads to #3.

* we short-change our kids too often - my 3 year old happily devoured caramelized fennel and onion, despite being disgusted at all things onion before, because she was excited to try a new food
* trying new things is FUN, if you make it fun and include them - Kale chips still make my kids crazy-excited
*  hiding veggies in a dish never hurt anyone:  cauliflower mashed potatoes, zucchini egg fritters, zucchini mini-quiches, fennel root (finely chopped) in meatloaf...the possibilities are endless!


With a produce box not only would you be upping your family's veggie intake by forcing yourself to use up the harvest, reducing the amount of meats, cheeses and processed foods you buy, but you will also feel so good knowing a few more things:

1.  By buying local, twice as much financial support for the local economy is generated as shopping at a chain store.

3.  It helps the environment - not traveling far means not using up fuel and emitting toxins into our air.

4.  Seasonal eating is so much easier on our bodies - it assists in better digestion and energy flow, not to mention assisting the soil to grow what is in season as opposed to forcing it to grow out of season with more chemical pesticides/herbicides/soil enhancers.


We are so lucky to have Harvest2U here in Southern California...they harvest from small farms within 50 miles, and deliver to the consumer within 36 hours of harvest.


They also commit a significant portion of every purchase to assist less fortunate families in local communities through their Harvest to the Hungry program.

Their delicious produce is used exclusively at EAT Marketplace in Temecula, where you can grub on some amazingly unique culinary delights like the Paleo Breakfast Bowl (Cook Pigs' braised heritage pork over roasted sweet potato and yam, topped with organic farm egg, sauteed greens, chermoula and avocado) and the Banh Mi Wild Tuna (shredded pickled veggies and cabbage, cilantro, avocado and green sriracha on pretzel baguette).

Harvest2U has generously offered my readers $25 OFF your first Harvest Box!  This is a huge discount, and can almost get you a free box!  Use coupon code RBN25 at checkout.


Don't live in Southern CA?  LocalHarvest.org is a great resource to find a CSA near you.

Are you already a member of a CSA?  Tell me how you like it!
Have you always wanted to try one out?  Take advantage of this offer and up your nutrition this summer!

Zucchini Fritters:
Grate 2 small or 1 large zucchini, squeeze out the liquid. Mix with 1 egg, 1/4 c. flour, handful of cheese (I used random bits of Parmesan and mozzarella that I had), and anything else you may have on hand to dice: scallions, parsley, (I used dill and fennel), onion, bacon. Pan-fry (I used pancake griddle) spoonfuls of the mixture in oil (I only cook with coconut oil), flattening with a spatula, until browned on both sides. Drain on paper towel if needed.