For the first time in his life, Fireman has some serious lower back pain going on.

I'm certainly no stranger to low back pain, but it's a first for him.  And being the strong, fit firefighter that he is, I know he's expecting to bounce right back to normal quicker than might actually happen.  He tweaked it at work, lifting an obese patient, about a week ago.

Something to do with seasonal changes, autumnal releasing the old to accept the new, clinging to that which no longer serves us, that sense of hunkering down for the colder months, stressing about gathering enough nuts (money) for hibernation...

I sent him to acupuncture today, which he'll get hopefully every other day for awhile, and I've been doing Reiki (I got Reiki I certified over the summer) and massage on him. 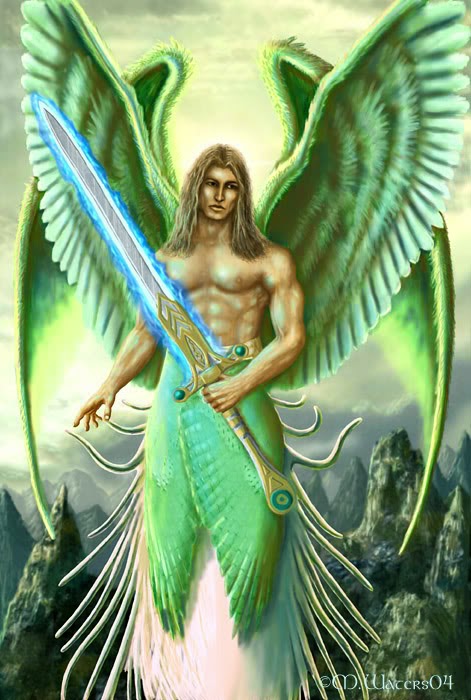 (You can fly on down and heal me any day, there, Raphael-ly!  Any clairvoyants/mediums out there?  Do angels really look this human-like with rippling pecs and all?  Kinda resembles my husband...if he had long hair and a mermaid tail...he should pose for angel portraits...I'm a lucky girl!)

Sooooo, what was I saying?

Oh, yes.  That  I discovered the world of lightworking almost one year ago, and I'm going to be cheesy and say it because there's no other way to say it....I've been transformed.

This will either resonate with you, or it won't...but it's true.  It has happened.  I'm awake.  And in case you were wondering, I'm not religious nor does all of this have anything to do with religion.

In fact, I considered myself an atheist for many years, and thought that religion and spirituality were synonymous.

Now I'd say I most closely connect with Buddhism, and I understand that religion and spirituality are distinctly different.

What does this mean?

A few years ago, Fireman and I were visiting his parents and his sister and her boyfriend at his parents house.  Fireman was pretty worked from his firefighting academy, physically and mentally, and had been experiencing frequent headaches from an injury during the academy.  His sister told him to lay down on the floor, and she and her boyfriend crouched at his head and feet, closed their eyes, and began doing various hand movements over and on him, combined with some heavy breathing.  I did not understand what they were doing.  I did not get it.  I was slightly curious, mostly embarrassed and very annoyed that they were doing some kind of magical healing to my husband that I did not know how to do.

When they later moved to a commune large acreage property to homestead with some other couples, I was even more curious, embarrassed and annoyed.  So was my husband.

They were weird and magical and...weird.

When they hugged me longer than normal while exhaling audibly, I felt self-conscious.

When she brought a magic potion herbal tea offering to my baby shower and read aloud Kahlil Gibran's Children, I felt annoyed and inadequate.

I have no idea how quickly or fully people "typically" awaken, but here's how my journey's basically going down:

*I first learned about lightworking from a Medium/Clairvoyant in December of 2013, and here I am less than a year later,
*Reiki I certified,
*with a sensory-sensitive son who has been helped tremendously by lightwork (and other things I'll soon write about),
*creating a children's book about lightworking,
*A Certified Life Purpose Guide

Things they are a'changing...

I am beyond excited for what the future holds.  I have been SO immersed in learning, changing and evolving that I have not even known where to begin in sharing it all on this blog.  I feel so eager to share, to guide others who may also be searching for that missing piece to their otherwise comfortable lives...but I'm letting it flow out as it will...as feels right.

So stay tuned for more information, explanations, inspirations and stories!  I can't wait to share this next phase of my journey with you!

Be sure to sign up for my emails so you'll hear about my upcoming:

Children's Book of Love and Light