Fire Wife Life ~ The Night I Prayed For Mercy

It was primal...both what I felt, and what I saw.

I can tell you what I saw, but I'm still not quite sure what I felt.

I was in an 85 degree stagnant trailer with 4 sweaty, sticky little ones, and it was rocking like there was some hanky panky going on...but of course there wasn't. It was the 60 mph winds outside that were driving the desert sand so hard into all the trucks and trailers that everyone was getting a new paint sand job.

We were in the desert for an off-roading weekend, in the midst of Southern California's "worst" storm of the winter, which I realize is nothing compared to what the rest of the country, and world, go through.  We're weather wimps...I know this.

But they were pretty insane, those winds. 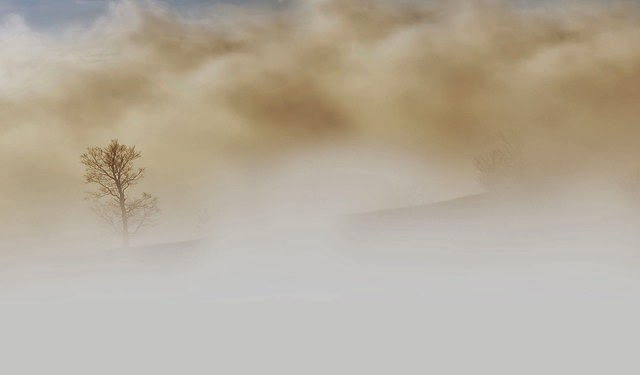 When they first picked up the kids whooped and hollered in delight at their flying hair and clothes, at the socks and hats zooming by, at the granola bars and apple cores getting caked in sand. Then when it began to whip up into mouths and eyes and sting bare skin we scrambled to find goggles and long pants and shirts.

And then it just reached not-fun-anymore status.

So the women ushered kids and cousins into trailers, and little faces smooshed up against the windows to peer out at the men battening down the hatches. They hurriedly detached awnings and canopies, secured folding chairs and tools and quad whips...all the while ignoring the stinging sand pelting their bare arms and legs. After securing the basics, they then went as a group to each rig, lending a hand with the heavier tasks of raising dirt bikes off the ground or tethering down a tarp or offering up a word of advice.

Pre-kids, I would have been out there with the guys, helping out, pretending the winds didn't bother me until I was physically in pain.  But now here I was, forced to remain inside with my two and my two nephews, which I didn't mind at all.  But it amplified my maternal role, my femininity, in watching the offspring and depending fully upon the men for security.

The men would sometimes stop to smoosh their own face up to the window, making silly monster faces at the ones on the other side of the glass.

They flashed confident, comforting smiles, appearing oblivious that there was a small tornado swirling behind their backs.

After awhile the novelty of the show wore off, and the rocking of the trailer became normal, so movies were watched, snacks were eaten, and pictures were colored.  The menfolk had enough cold beer to ignore the storm and go on rides in the dunes and attempt to have conversations through the howling wind.  I enjoyed my own cold one and the rare treat of sitting down with a book while the kids jumped around.

The afternoon wore on into the evening, and the wind was not only showing NO signs of easing up, but it was getting much, much stronger.  I got a tad nervous each time the trailer lurched with a gust of wind, and wondered how much sleep we'd all get that night.

Burgers and s'mores were grilled indoors. Cabin fever became rampant, so bedtime came early.  But just as the kisses were hitting foreheads and flashlights turning off, the trailer creaked and crunched and lurched so greatly, and the massive gust of wind howled so loudly, that my heart pounded right out of my chest and I broke out in a cold sweat.


I quickly glanced around to see where I might throw the kids in case of tip-over, while talking feverishly in my head to my guardian angels and all higher beings who might assist in sparing these 16 souls all alone in the middle of a massive desert.

I reflected on our drive in the day before...how thrilled we were to see we were THE ONLY camp in this hugely popular off-roading destination; a place that was usually filled with thousands of people on any given fall or winter weekend.  Slightly eery, but mostly awesome.

Then I understood, we were THE ONLY crazy ones who hadn't heeded the weather warnings.  This was the one storm of the year the weather reports were actually correct about...usually they were all talk.  I remembered the 'Southern California Tornado Watch' post I'd scrolled by on my Facebook feed...I'd deliberately ignored it.  Tornado?  Southern CA?  pffftttt.  My mom had been texting me about the hurricane of rain and wind hitting them back at home...at least there was no rain out here, just the wind.

It felt like we were on a boat.  My son and his cousin giggled nervously with eachother and asked my husband if the trailer might tip over.

I glanced up at Fireman in his bunk and saw that he had turned so his head was on the opposite end of his bed...this way he'd be standing on his feet if we tipped over, instead of landing on his head.


He caught my eye (which must have been really wide), registered my expression (which definitely was scared-to-death), nodded, and climbed down to get dressed.

When we'd arrived at the camp the day before, we'd filled in the circle of rigs in the only available spot, which happened to put us broadside to this wind. Fireman could see on my face that this was not going to fly...we needed to re-position nose to the wind.

So, once again, little faces smooshed to the glass to watch Daddy begin the tedious task of picking up our camp and re-hitching the trailer and firing up the truck, all in the dark and the midst of a 10-foot visibility sandstorm. I wanted to go out and help my husband, but the kids clung to me. I hoped the other men weren't asleep yet and they might see the flashlight beams and come out to help.

Soon other flashlight beams joined Fireman's and I gave thanks once again for the power of the clan.
The atmosphere in our trailer lightened instantly as their deep, comforting muffled voices filtered in through the thin trailer walls, and progress could be heard in the clicks and cranks of machinery being moved.

In our modern world, and especially in our mild Southern CA weather, we don't often have the opportunity to witness a primal display of group masculinity: protection, strength, confidence. It has the power to settle the strongest of worries and fears that the feminine has for the safety of her children, her village.

The tribes and clans of long ago came to mind: the men who united to bravely defend and protect their villages and kinfolk; the circles that were made with covered wagons, just as we now make with trucks and trailers.

Most of us have experienced dads/boyfriends/husbands braving a storm to tow a car, run into a store, get a child to the doctor. But I think few of us have witnessed a group, a tribe, a clan of masculinity collectively assisting one another and protecting eachother's women and children in the face of a common threat.

I was reminded of just how often I have my guard up, how often I have to wear my daddy and mommy suit , with Fireman being gone half the days and nights in a month.  I was forced to relax into only the nurturing role, not the protector role, which allowed me the opportunity to really feel my vulnerability in a refreshingly feminine way.

It was in my feminine vulnerability that I was able to appreciate the masculinity that surrounded me.

I was reminded of this experience Danielle LaPorte posted about - a post about strong, vulnerable men that deeply moved me, just as this night of Arabian winds did.