Eczema - What Healed My Infant Daughter 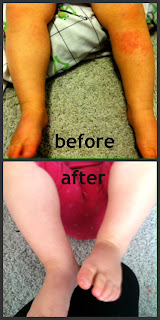 Daughter got a rash on her shin at the start of spring, around the time I began sneezing my head off every time I so much as looked in our weed-ridden backyard. I figured it was either heat rash or an allergic reaction to pollens, and began giving her daily doses of Histaminium, omitting any cleanser in the bath and only using lavender oil, and slapping coconut oil and breast milk on it.

When it had spread a bit to the other thigh a few weeks later, I became frustrated and concerned. She had begun to scratch it a bit, and say "Owie" when she touched it, which made me sad.

What the heck couldn't be healed with breast milk and coconut oil?


I decided to ask our Chiropractor/Family Doctor/Pediatrician if he had any insight or suggestions, and texted him some pictures. He confirmed it looked topical/environmental and suggested I wash all her pants inside out many times in hot water and vinegar only- no soap.

I did, along with trying Tea Tree Oil, oatmeal packs, tea bags...no improvement.

I got desperate and asked the Dermal Spirit Guides in the sky for help.


One day later, I see a Facebook post from Mommypotamus with amazing before and after pictures of her friends' daughters eczema. The rash looked a lot like Daughter's. Could it really be eczema? Why would she get eczema all of a sudden?

I ordered the amazing Vintage Tradition tallow she recommended that day, and knowing eczema is a dietary issue, I thought about her diet. I realized the antibiotics I'd taken a month prior for mastitis, along with the carb-y snacks she'd been loving lately just may have given her an overgrowth of candida. I decided to cut out gluten and dairy for her, and make sure she got her daily dose of Jarrows Baby Probiotic. I also read the reviews of Holistic Squids The Eczema Cure ebook, hoping to find her tips online and avoid paying $30. By this time it had spread pretty much all over both legs, but it wasn't looking like it would go on her trunk, so I decided to keep trying my way.

The tallow was wonderful, and definitely made a difference as it took away the itchiness and inflammation. I waited a week like Mommypotamus' friend had done, but it was persisting!

One night as Son and I were taking our Bio-K after a weekend of naughty camping food, Daughter happened to have a lot of it. She's had it before, but I've only allowed her a few sips, not wanting to overwhelm her little gut and give her the runs or something. It's one of the best probiotics out there with 50 billion live bacteria, and it's not cheap, but it works!

Well, apparently, mega-doses of probiotic was exactly what was needed, because the next day, her eczema was significantly better!


I've read about mega dosing probiotics for eczema, but I wasn't sure exactly what constituted a mega-dose for a toddler. Well, now I know...it's about a 1/4 bottle of Bio-K, which she got almost daily, as well as a largely gluten-free diet (she snuck a few of her cousins' snacks).

It was conquered in a week and a half.

I'm so glad she wasn't suffering for too long- I really feel for eczema and psoriasis sufferers. My own husband is a sufferer, but probiotics alone aren't helping his, and he has yet to commit to going gluten-free. If only I can find some tasty gluten-free beer.....anyone know of any? I might just have to get a copy of The Eczema Cure for him...

Do you or a loved one suffer? Any tips? Stories? I'd love to hear from you!