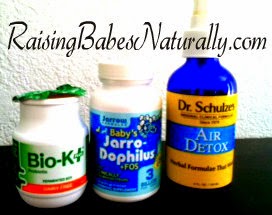 Fireman got super sick last week - it was very random. It looked like food poisoning, but there was no vomiting, only the other end (gag) so who knows what it was. The kids and I didn't get it (thank the good WOman above), but who knows if it was contagious or not because I went to great, exhausting lengths to keep us all separated from him as much as possible. That's not easy when you're all in the same house, is it, fellow mommas?

I was SO looking forward to some Mommy time after his 72-hour shift at the station, and instead had 5 days of sick Daddy quarantined to our bedroom upstairs.

Don't you hate that "sicky" feeling the entire house takes on even when only one person is sick?

It really throws everyone for a loop. And I seriously started to worry about him dehydrating by day 5, so I had him go to Kaiser, even though I knew they would proabably just toss an antibiotic at him (they did, he didn't take it). I had hoped they would be responsible enough to test a stool sample before prescribing an antibiotic, to determine if it was bacterial or viral, to know if an antibiotic would even help in the first place. But, the doctor told him there wasn't much they could do for him, gave him the prescription, and then asked him to bring a stool sample back whenever he could. He took one back later that same afternoon, and they said it'd be 72 hours before they could call him with the results. 72 hours? By then he'd be well on his way to recovery.

I'm not knocking Kaiser alone...we've just had to switch our health insurance to them, and I hear great things about them from many people. But they, and most doctors, are still so quick to prescribe antibiotics without knowing if the illness is bacterial or viral, contributing to the Super Bug effect.  And they never did call with results...


So, why didn't he take the antibiotic?

A couple of reasons. We're pretty anti-pharmaceuticals unless we feel like we're dying (mastitis, anyone?  Yes, yes, I know there's natural ways to cure that, but I could not be dying AND taking care of my kids at the same time while I waited for the natural cures to kick in).

We didn't know if Fireman's illness was bacterial, so we didn't want to wipe out his immune system needlessly on a 50/50 crapshoot. As a firefighter running calls on some seriously ill people, he needs his immune system in tip-top shape.

Also, all pharmaceuticals have side effects - some more well known than others. The antibiotic they prescribed was Ciprofloxacin, which can have similar side effects to the illness you're feeling in the FIRST place. But the kicker? Significant risk of rupturing your Achilles tendon. No joke. The doctor even admitted to Fireman that he had, indeed, had two patients return with ruptured Achilles tendons after taking Cipro!

I, myself, had a reaction to the common Zithromax Z-Pak (Azithromycin) many moons ago, which I'd been prescribed for hives.  Day 5 on it, I woke up and went to get out of bed, and fell right on the floor.  My legs did not work.  2 days in the ER and gazillions of tests by Neuro Surgeons and Specialists and scary diagnoses later (Guillain-Barre Syndrome!  Neurological Infection!  Spinal Meningitis!), I finally learn from my ol' dermatologist that yes, indeed, nerve function blockage that affects normal muscle action is a possible side effect of Z-Pak.

But enough bitchin' about the chemicals we avoid at all costs...two things I wanted to tell you about that I SWEAR by when any of us get sick. Actually, make that three:

The most amazing Probiotic EVER, with a minimum 50 billion bacteria. It's in the cold refrigerator case of the vitamin/supplement section in health food stores. The strawberry flavor tastes like yummy strawberry yogurt (contains dairy) which kiddos love. The non-dairy, fermented soy flavor tastes kind of coconutty, but my little one does not dig it. It comes in these little 3.5 ounce bottles, and it's not cheap, but worth every penny.

I consider it necessary for all illnesses, but ABSOLUTELY ESSENTIAL if put on antibiotics to restore all the good bacteria that's being killed.

For my hubby's aggressive intestinal bug I had him chug 2 little bottles a day - one in the morning and one at night. That may be excessive, but I wanted to bombard his body with good bugs.
When little man gets sick, or even for sporadic "maintenance," I let him take a few sips of it morning and night. I drank a bottle of it daily when I was on antibiotics twice this year for mastitis, and I've never gotten a yeast infection or any thrush issues with my babies.

Speaking of babies, I'll add a fourth thing to tell you about:


Also in the cold section, it's a powder you just dab on your wet nipple or bottle before feeding (I did it twice a day while I was on antibiotics and breastfeeding). It's gluten-, egg-, and peanut-free, but does contain trace amounts of dairy, soy and fish.

It's become very popular, but I find that people often forget about it when it comes to hydrating during illness, and instead turn to the old Gatorade or diluted juice standbys. But this stuff is so above and beyond in terms of hydration and replacing electrolytes...and the Pink Guava or Pineapple flavors are SO yummy. They've become my son's summer "treat juice," something I can feel really good about giving him.

I could write for DAYS about this man and his amazing products, but today I'll just talk about this spray that is 100% herbal, made with 100% pure essential oils of Eucalyptus, Grapefruit, Lime, Lemon and Orange. It pretty much smells like the Freshest, Cleanest Heaven on Earth, and I'd bathe in it if I could. It is proven to disinfect and purify the area it's sprayed in...Dr. Schulze developed it years ago to spray in his clinic where many, many very ill people walked through daily. Again, a pricey product, but well worth the money in my opinion.

If not for this spray, I could not have handled sleeping in our room while Fireman was ill - he was quarantined in this room for 5 days mind you, with fans and AC running in the middle of summer, so not much fresh air available to air it out. Not to mention he was on the toilet about 20 times a day, and was a sweaty beast, so the room was DISGUSTING. I had him spray this in there a few times throughout the day and right before I would come in for bed.

I hope these help you and your family!